US is No Longer the Center of the Online Universe 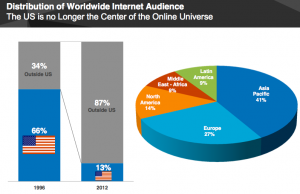 North America including US is now behind Asia and Europe in the distribution of world wide Internet audience chart. comScore Inc. published the “2013 Southeast Asia Digital Future in Focus” report. The report covers the digital marketing trends in Southeast Asia including, web usage, video, online advertising, e-commerce, search and social media. It’s a great report if you are targeting now or considering targeting that part of the world in near future.