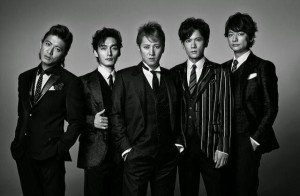 On January 13th, the rumor of SMAP break up shook Japan. SMAP is one of the biggest pop (boy) bands in Japan and Asia even after more than 25 years together. Everything they do becomes a huge hit, from singing, acting, and appearances on the TV shows and movies as a band and individually. Their long-run weekly TV show, “SMAP x SMAP” is one of my favorite Japanese TV shows as it is to many Japanese. Immediately after the rumor came out, their record company’s stock fell deep.

It seemed that the rumor had very credible source, and all types of online and off-line media started to treat their possible break-up as a top news. Fans went to social media to express their concerns and took actions in hope of keeping them together, and other audiences joined.

First, fans created a petition on Change.org asking SMAP to stay together. It collected more than 10,000 signatures from around the world in the first 2 days. Then, fans started a campaign to purchase one of SMAP’s hit song, “Sekai ni hitotu dake no hana” (the only one flower in the world) on Twitter and other social networking sites. Although the song was originally released in 2003, it reached the #1 spot on the CD single ranking on the 22nd. Their 5 other songs also made the top 100. They showed how much SMAP was loved, and still is a band that could bring profit to the record company and the management company.

On January 18th, 5 days after the break up rumor came out, SMAP members appeared live on their weekly TV show, “SMAP x SMAP”, and each member spoke that they were staying together. And that moment, the show scored 37.2% viewership rating, and the server for Twitter and 2ch (Japan’s popular BBS site) went down, and also slowed down many websites in Japan. Broadcasting Ethics & Program Improvement Organization (BPO) website was also down for a while after some media pointed out that SMAP could’ve been forced to appear live by the management company, and that people should complain the power harassment to BPO.

It’s been 10 days since their TV appearance, but people cannot stop talking about them. Even Japanese Prime Minister, Shinzo Abe, couldn’t help but to express his relief that SMAP was not breaking up during a budget meeting in the parliament’s Upper House.

I am very happy that they are staying together, and this event will stay in my mind as a great example of how people are closely connected online, and can become such a great force using social media.