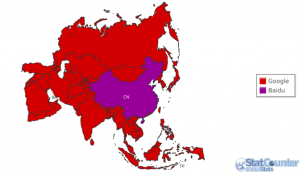 Asia has been a very unique market for Search Engine Marketing since the day one of SEM compare to other markets in the world as locally grown search engines have possessed the majority of the market share. However,  in recent years, the search engines such as Yahoo Japan and NAVER have lose the momentum. Even Baidu seems to have lost the overwhelming strength in Chinese market they once had.

See the top search engines in each Asian country published by StatCounter.com below. You find that Google now has the biggest market share even in Japan and South Korea. In China, although the share is still less than 10%, relatively new search engine Haosou (used to be known as Qihoo 360) is growing the market steadily, and reflecting shadow onto Baidu’s throne. Overall, Google now has more than 80% of market share in 7 out of 11 listed countries, and more than 90% in 6 out of 11 listed countries below. This data is very useful especially for the advertisers.

Historically, Yahoo Japan has been taking a majority market share in Japan. Keep in mind that the market share is usually calculated using the site traffic, and not the number of searches conducted with each search engine in Japan. For that reason, Yahoo Japan, which is a portal sites, had advantage over Google Japan. Since Yahoo Japan and Google Japan have made the partnership deal in 2009 for Yahoo Japan’s organic search results to be powered by Google Japan, the search users don’t see much of the differences in the search results no matter which search engines they use.