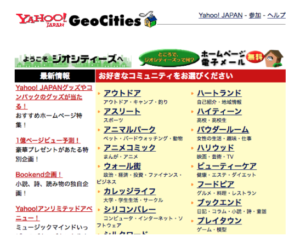 On March 31, 2019, Yahoo! Japan shut down its GeoCities services. It is indeed one of the ends of an era. GeoCities originally started the services in the US, and in 1997, they expanded the services to Japan. Since Yahoo! Japan took it over in 2000, it offered the easy and inexpensive (free) website solutions for everyone who wanted to create content and communicate with others on the internet through websites.

By the time GeoCities started in the US, many Japanese were already creating their own private websites using software such as IBM’s Home Page Builder. I was one of them. Knowing the market in both Japan and US, I believe this trend was very unique to Japan. While businesses were still unsure of how to utilize websites to their benefit, private citizens – students, mothers, senior citizens, etc., they created their own websites to express their interests and to connect with others with similar interests. I was one of them. I owned several websites, several of them had #1 ranking in certain big keywords, and it was the best way to be found by the people with similar interests. I moved them to GeoCities when Yahoo! Japan took it over. It was in a way serving as social networking before SNS became a thing.

Thank you, Yahoo! Japan and GeoCities for good memories, and lots of friends I found through the services!